I recently read an article that presented two Biblical reasons why we should choose to sing at church, even on mornings when we don’t particularly feel like it.

I agreed whole-heartedly with the author, and yet, while reading it, I couldn’t help but wonder what it must have been like for Adam and Eve to sing to God in the Garden of Eden prior to the fall. In a world that up to that point knew no sin, would Adam and Eve have ever not felt like singing? God gave them voices so that they could praise Him out of the overflow of their hearts. And how full their hearts must have been standing in His presence, unashamed, living in His perfect fellowship. Physically, their voices would have been completely free. Every note they sang would have been perfectly in-tune, and I suspect that even their spontaneous melodies would have been far more beautiful than even the most skillfully written tunes of today.

However, when Adam and Eve rebelled, two things happened: first, they became self-aware–ashamed of who God had created them to be. And second, the physical universe began to die. From that point forward, every physical effort, including the act of singing, would be a struggle. Adam and Eve’s voices–once pristine instruments, hand-crafted by God– were now rusting. And because of their newfound self-awareness, their response to that physical struggle would have been to turn inward, seeking value in their own successes and failures, rather than in the inherent worth that comes from being an image-bearer of God.

Today, our own struggles with singing mirror those of Adam and Eve’s. Every difficulty we experience stems from the consequences of their rebellion. However, while we inherited this struggle at conception, Adam and Eve came to know it only by contrast to what it had been like for them prior to the fall. Oh, how heartbreaking it must have been for them the first time they began to sing after having been exiled from God’s side, suddenly realizing that their voices would never be the same again. For the first time, their songs would have been sung out of a deep longing to experience the kind of fellowship they once had with God in the Garden, rather than solely out of the peace and joy that overflowed when standing unashamed in His presence.

Today, we too, sing out of a desire to be in perfect fellowship with God. We sing out of regret over the way we believe things were meant to be and out of the hope we have in God’s promise to make it so again. Ironically, the instrument that was designed to help us feel closer to God is now such a source of frustration for many singers that it actually has the opposite effect. Instead of helping make us more aware of God’s presence and goodness, it actually leads us to focus on ourselves instead. Often, people avoid the act of singing altogether, believing that some were created to sing and others were not. This, I believe, stems from our culture, which places great value on the voices of professionals living in our music libraries, rather than on our own voices and the voices of our neighbors. The fact is that every one of us was created to sing (and sing well). And in those who profess our faith in the death and resurrection of Jesus Christ, that reality will one day be realized. In heaven, we will all sing in the presence of the one who will have restored our physical bodies and is currently sanctifying us by His love. And we will in no way be tempted to worship the excellence of our songs rather than the excellence of the One who gave them to us. We will, as Adam and Eve did prior to the fall, sing completely unhindered before the Lord.

But what do we do until that day comes? What do we do when we are standing in church on Sunday morning, unable or unwilling to sing to God out of joy and gladness? I agree that we ought to be obedient to the Bible’s commands to sing anyway. And, obedience often precedes joy. However, I have also found that the journey of striving to use one’s voice in many ways parallels the Christian walk itself. This is because people sing according to who they believe they are in the eyes of God. When we sing, if we react to our own voices as though our self-worth is determined by the quality of our tone, then we have no choice but to either praise or curse ourselves for either matching or falling short of our own arbitrary standards. However, when we sing in the knowledge that we have been declared children of the King, we do so only out of gratitude and humility. And how foolish would it be to think that our songs’ worth could be found in their own beauty? After all, what song could ever be beautiful enough to adequately express God’s worth? What voice could ever fully express the splendor of His glory? Like any act of praise, our songs are nothing more than an offering of what he first gave to us, and apart from him, they possess no value at all.

Furthermore, in my experience with training singers, I have found that a healthy, God-honoring perspective toward one’s own voice can actually nudge a singer toward technical excellence. On the other hand, those who are hyper-critical of themselves tend to fall back into the same technical mistakes over and over again. It seems as though the physical use of one’s voice is influenced, to at least some degree, by their own spiritual condition. In other words, someone who knows they are loved is going to sing differently than someone who does not. This truth applies not only from one singer to the next, but from one moment to the next in the life of an individual.

What we must understand is that if God’s commands to sing were contingent upon our songs matching some standard of heaven, those commands would have been rescinded after the fall, because no such standard could ever be met by someone born into sin. Our imperfect songs are acceptable only because of the perfect sacrifice of Christ. And when we sing as a Church, Christ stands in our midst, and it is actually His voice that is heard by the Father (Heb 2:12; Ps.22:22). Our worth has always been given to us by God–first at creation, when we were marked with His own image, and second, at the cross, where Christ declared us righteous despite our own depravity. And so, whenever you sing, you are being faced with a question: “Do I truly believe that I am a child of the King? Or, am I seeking my worth in the quality of own voice?” Christians, know this: we who follow Jesus sing because God has declared us worthy. Not the other way around.

Jeff Mathena is a vocal coach for Kari Jobe, for KING & COUNTRY, Phil Wickham, Elevation Worship and more, and founder of The Unhindered Voice. 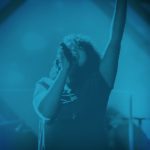 Working On Your Voice Throughout The Week 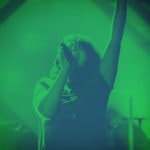 Warming Down Your Voice After Church 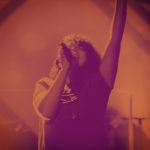 Vocal Warmups On Your Way To Church 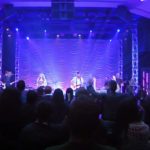 The "Us" – Keys To A Good Vocal Blend